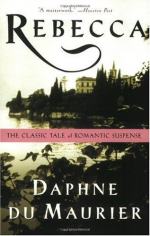 5. What does the leather book contain?
(a) Detailed accounts.
(b) A yearly menu plan.
(c) Details about guests at Manderley.
(d) Details about Rebecca's lovers.

1. What does Frank think about the narrator?

2. Who first suggests the revival of the Manderley Fancy Dress ball?

3. What does the narrator believe to be inevitable in everyone's life?

4. How is Manderley's drive different from how the narrator imagined it?

5. To what does the word "gaucherie" refer?

1. What images relating to death are contained in this chapter?

2. In what ways is the protagonist of Rebecca a mystery?

3. Comment on the layers of meaning in Chapter 19 of Rebecca.

4. What are the reasons the protagonist gives for her fear of stifling in Mrs. Van Hopper's room?

6. What are safe topics for the protagonist to read aloud to her husband?

7. What leads to the protagonist's encounter with Mrs. Danvers in the west wing?

8. What do you think he means when Frank Crawley tells the protagonist that it's vitally important they they talk?

10. What does Maxim say is missing from his proposal?