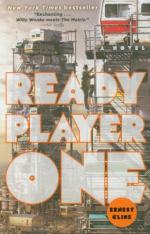 This quiz consists of 5 multiple choice and 5 short answer questions through Level One: Chapters 12-16.

2. What is the name of the company that James Halliday created and controlled during his lifetime?
(a) Gregarious Simulation Systems.
(b) Intelligent Designs Systems.
(c) IOI.
(d) Lost Coast Systems.

3. What does Wade use as a hideout in Ready Player One?
(a) An old subway tunnel.
(b) An abandoned train car.
(c) A broom closet.
(d) An abandoned van.

4. Who is the first of the authors described in the "entire recommended gunter reading list" described by Wade in Chapter 6?
(a) F. Scott Fitzgerald.
(b) Douglas Adams.
(c) Orson Welles.
(d) Ernest Hemingway.

1. What is the name of Wade's aunt's boyfriend in Chapter 1?

2. What is the "Student ID" name that Wade is assigned at school?

3. On what planet does Wade visit a re-creation of the "Revenge of the Nerds" house in Chapter 13?

4. What are the four giggest gunter clans that offer invitation to Wade to join them in Chapter 13?

5. How many people live in Wade's aunt's trailer, according to the narrator in Chapter 1?