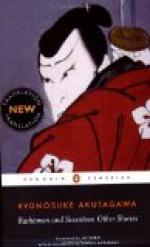 Ryūnosuke Akutagawa
This set of Lesson Plans consists of approximately 98 pages of tests, essay questions, lessons, and other teaching materials.

He grew up in Honjo, a poor and run-down district in Tokyo, and the boy comes to like the area more than richer areas. This upbringing and event can perhaps explain his interest in the macabre.

He has a single daughter and is very possessive of her, to the dismay of the local Lord. He is a contrarian, and where others find the Lord's promotion of his daughter a great honor, this character wishes only that the Lord demote her.

He is a Buddhist priest who has low self-esteem.

To get back at the town who ridicules him, he plays a trick, posting a sign near Sarusawa Pond stating that a dragon will emerge from the pond on a certain date. To his amazement...