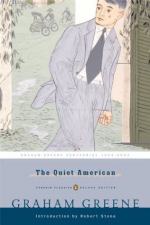 Graham Greene
This set of Lesson Plans consists of approximately 160 pages of tests, essay questions, lessons, and other teaching materials.

• Thomas Fowler waits for an appointment with Alden Pyle but he never shows up.

• Fowler's lover who had left him for Pyle is waiting in the dark outside his apartment when he gets home.

• Phuong makes an opium pipe ready for Fowler, who takes three more after that.

• Fowler knows he is a suspect because of Phuong.

• Vigot asks Fowler about how he first met Pyle.
• They go to the mortuary where Fowler identifies the body.

• Fowler gives Vigot his detailed alibi for last night when Pyle was murdered.

• Vigot says that Pyle was doing a lot of harm.

• Back at the apartment, Fowler explains to Phuong that Pyle is dead. She shows no reaction.

More summaries and resources for teaching or studying The Quiet American.