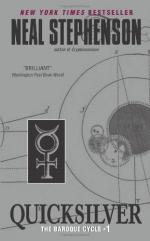 Neal Stephenson
This set of Lesson Plans consists of approximately 122 pages of tests, essay questions, lessons, and other teaching materials.

1. How does Daniel describe the beginning of his friendship with Newton?

Daniel says that the beginning of his friendship with Isaac Newton was like two comets begin drawn together in orbit. They were both brilliant solitary men with beliefs and ideas that others thought strange.

Daniel began studying Natural Philosophy because that was what Isaac Newton was studying, and Daniel had a huge interest in the subject-- much more than in his original line of study.

3. Why does Daniel leave his family and go to London?

Daniel chooses to leave his family in Boston and go to London as Princess Caroline has asked him to come and help stop a feud between Isaac Newton and another philosopher. She thinks that Daniel's relationship with Isaac Newton will make him a good candidate for this job.

4. How does this book begin?

This book begins with an invocation to the muses for inspiration and enlightenment and entertainment.