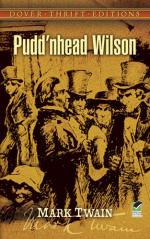 Mark Twain
This set of Lesson Plans consists of approximately 128 pages of tests, essay questions, lessons, and other teaching materials.

• Dawson's Landing is a small town near the Mississippi River. Judge Driscoll is the most important person in town.

• Judge Driscoll lives with his wife and sister. He never had any children but wanted some.
• Judge Driscoll's brother Percy had several children who all died of illnesses. One remaining son lives, but his wife died giving birth.

• Roxana, Percy's slave, gave birth to a son around the same time. She cares for both the children. Roxana is only 1/8 black, so she looks white.
• David Wilson is a lawyer. He makes a strange comment about a dog that makes people think he is not smart. They nick name him Pudd'nhead.

• Since Wilson can't be a lawyer there, he studies other things like surveying and accounting. He also collects fingerprints.
• Percy's slaves are accused of theft. He threatens to sell them downriver if they don't admit who did...