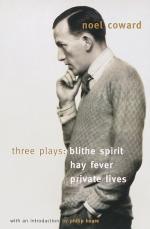 Noel Coward
This set of Lesson Plans consists of approximately 151 pages of tests, essay questions, lessons, and other teaching materials.

This quiz consists of 5 multiple choice and 5 short answer questions through Act 3.

4. How long have Amanda and Elyot been divorced at the start of the play?
(a) Three years.
(b) Five years.
(c) One year.
(d) Seven years.

1. What starts the final fight between Amanda and Elyot in Act II?

2. What appears to have been a contributing factor to Elyot and Amanda's jealousy during their marriage?

3. In Act II, what does Amanda reveal to Elyot that first begins to upset him?

4. What did Amanda let her admirer do that made Elyot jealous?

5. How is Amanda behaving toward Victor and Sibyl when she first enters in Act III?