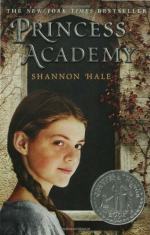 Shannon Hale
This set of Lesson Plans consists of approximately 136 pages of tests, essay questions, lessons, and other teaching materials.

1. What does Miri decide to let go?

2. What does the priest announce after the ceremony?

4. How is the prince described?

5. What does Miri tell everyone in quarry speech?

1. How does Miri make it so everyone makes a perfect score on the next test?

2. How do Peder and Miri have a falling out?

3. How many hostages do the bandits have and how many bandits do the villagers have, and what does Os suggest?

4. How does Miri get help for the girls?

5. Why can the academy not continue for the winter?

6. What does Marda reveal to Miri and what is Miri's thoughts about the matter?

7. How does Miri and Peder's relationship seem at the end of the story?

8. What does Britta teach Miri?

9. How does the idea of schooling expand?

10. What do Miri and Esa think about concerning the prince?

1. Choose two significant symbols and trace and analyze their appearance in "Princess Academy". Are these universal symbols? Would they be understood in any culture? Are there other symbols that would portray the same idea? What are they? Why do you think Hale chooses the symbols he does?

2. Choose two important metaphors and trace and analyze their appearance in the novel. Are these universal metaphors? Would they be understood in any culture? Are there other metaphors that would portray the same idea? What are they? Why do you think Hale chooses the metaphors she does?

3. Discuss Hale's use (or lack ) of literary device (such as foreshadowing, clifthangers, deux ex machina, etc.), and how they add or detract from the story. Does Hale use too many or too little literary techniques? State which of the five major elements of fiction the literary device is related to (style, character, plot, setting, theme).

There are a number of interesting questions raised by "Princess Academy". Questions that Hale most likely want readers to consider and think through carefully. Discuss the following:

1. What does the term "author agenda" mean?

2. Name one idea/concept you think may have been a part of the Hale' agenda. Analyze that idea throughout the book and discuss Hale' probable agenda concerning that idea.

2. Do you think writers who have an agenda for writing should point it out in a preface?

3. How often do you think fiction is written with a clear agenda in mind by the author?

4. Research the life of Hale and see if/where his life may have influenced his writing.

5. What type of plot do you think Princess Academy is? Explain your response.

More summaries and resources for teaching or studying Princess Academy.