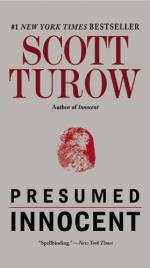 5. Why was there no reason for Carolyn to have used contraceptive jelly found in her body?
(a) She had her tubes tied.
(b) She had a hysterectomy.
(c) She used an IUD.
(d) She used a diaphragm.

2. What was Judge Lyttle's job before becoming a judge?

3. What is the name of the tavern where Rusty meets Lionel Kenneally in Chapter 30?