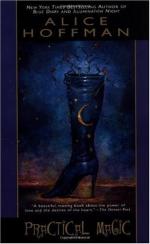 Related Topics
The Museum of Extraordinary Things
The Dovekeepers
The Marriage of Opposites
Faithful: A Novel
The Rules of Magic
The World That We Knew

Alice Hoffman
This set of Lesson Plans consists of approximately 138 pages of tests, essay questions, lessons, and other teaching materials.

Bring what you consider to be your lucky charm to class one day.

As a television reporter provide a detailed report with interviews of the search for James Hawkins.

Have everyone bring in pictures cut from magazines that illustrate their idea of what Gillian, Jet, Frances, Sally, Jimmy, Gary, Ben, Gideon, Antonia, Kylie and Scott look like.

Create a trivia game based on "Practical Magic". Have the categories involve items from the book, such as magic, crime, family dynamics, fitting in with classmates, and history of witches.

Play the trivia game in groups with the winner of each group competing against each other for class champion.

Have each student select a character from slips of paper in a bag...