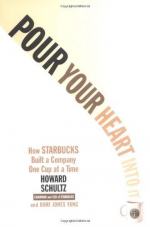 Pour Your Heart Into It Essay Topics & Writing Assignments

Howard Schultz
This set of Lesson Plans consists of approximately 134 pages of tests, essay questions, lessons, and other teaching materials.

Describe Howard Schultz's childhood, including where he grew up, the conditions of his upbringing, and why they were influential in his life's ambitions. Be sure to explain several of the examples that Howard provides in the book to support your analysis.

Chronicle Howard's relationship with his father as it is presented throughout the book.

1) Describe the way Howard views his father during his childhood and his conflicting feelings of admiration and resentment.

2) Explain how Howard's opinions of his father changed after his father's death.

3) Describe the various ways that Howard's father's approach to life inspired him to build a company with specific values in mind.

Before Howard joins Starbucks, he has several experiences that prepare him for the future.

1) Explain how Howard first escapes from the projects and what college is like for him.

More summaries and resources for teaching or studying Pour Your Heart Into It.

Pour Your Heart Into It from BookRags. (c)2022 BookRags, Inc. All rights reserved.