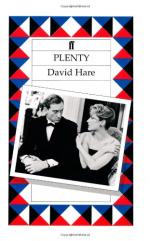 David Hare
This set of Lesson Plans consists of approximately 119 pages of tests, essay questions, lessons, and other teaching materials.

• In England in 1962, a man named Brock lies naked and sleeping while his wife, Susan, takes a break from packing to smoke a cigarette.

• A friend named Alice arrives with a takeout meal.

• She comments on the blood on Brock's face.

• Susan says that Brock is just medicated and drunk.

• Alice reminds Susan that Susan and Brock had had a fight but Susan says it was only a short one.

• Susan offers Alice some tips on how to function in the house and Alice asks Susan if she really must leave.

• Alice asks Susan what she should tell Brock when he wakes up and Susan tells her to tell him the truth and that everything will be all right.

• Susan leaves and Brock awakens and asks for breakfast.

• In France in 1943 during World War II, a radio broadcast is heard--an English voice giving a...

More summaries and resources for teaching or studying Plenty.