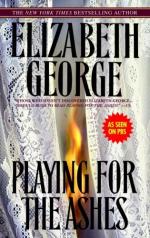 Elizabeth George
This set of Lesson Plans consists of approximately 107 pages of tests, essay questions, lessons, and other teaching materials.

1. What information about her does Olivia say her mother wouldn't want people to know?

Olivia says her mother would be happy to tell people that she had an affair with a musician more than twice her age and even hint at Olivia going slightly off the rails, but that is as far as she would go. She would not tell people that Richie was married, that he got her pregnant and then not long after found she had herpes. She also wouldn't mention that Olivia used to be a prostitute addicted to drugs. That Olivia says, her mother wants to keep a secret.

2. Why does Olivia say that on the outside her mother had an admirable social conscience?

Olivia describes how her mother, despite her proper upbringing, decided to work as an English teacher at a rundown comprehensive in one of the worst parts of London. At the weekends she would read to the blind. Later on in life she became the assistant director of recreation for children of a down syndrome school.