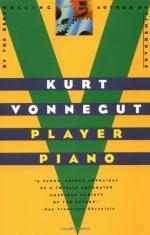 Kurt Vonnegut
This set of Lesson Plans consists of approximately 120 pages of tests, essay questions, lessons, and other teaching materials.

4. What cities (besides Ilium) fall to the rebellion at the end of Chapter 33?
(a) Atlanta & Philadelphia.
(b) Austin & Kansas City
(c) New York & Sacremento.
(d) Oakland & Salt Lake City.

5. What is a Ghost Shirt according to the Ghost Dance religion?
(a) A magical shield.
(b) A garment that makes the wearer invisible.
(c) A poison shirt used to kill enemies.
(d) A symbol of nobility.

6. To what nationality does the Ghost Dance religion belong?
(a) Portuguese.
(b) Russian.
(c) Aztec.
(d) Native American.

7. Why is Halyard depressed in Chapter 33?
(a) His wife has left him.
(b) The State Department is suing him.
(c) He does not have any money.
(d) The Shah has fired him as his tour guide.

9. Why do the police come to Dr. Proteus's farm?
(a) He is being arrested.
(b) He has to register his change in employment status.
(c) They want him to join the department.
(d) He is a suspect in a crime and must be questioned.

10. What happens after Paul takes a few sips of his drink?
(a) He demands a refund for the drink.
(b) He passes out.
(c) He dumps out the drink in the bathroom.
(d) He spits it out.

14. To where is PFC Hacketts being shipped?
(a) The Alaskan tundra.
(b) Siberia.
(c) Los Angeles.
(d) The Sahara desert.

15. What happens while Dr. Proteus is testifying?
(a) The judges orders Dr. Proteus be sent to jail immediately.
(b) People keep yelling from the gallery and interrupting the proceedings.
(c) Rebels break into the courtroom.
(d) The lie detector breaks.

2. What has the novelist refused to do in Chapter 24?

3. When Dr. Proteus meets the group of soldiers, what are they doing?

4. What do the rebels plan to do to EPICAC?

More summaries and resources for teaching or studying Player Piano.