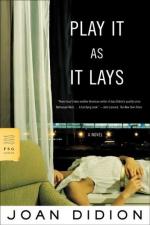 Related Topics
Blue Nights
South and West: From a Notebook

Play It as It Lays Quiz | One Week Quiz A

Joan Didion
This set of Lesson Plans consists of approximately 137 pages of tests, essay questions, lessons, and other teaching materials.

This quiz consists of 5 multiple choice and 5 short answer questions through Chapters 40 - 60.

2. What does Maria eat and drink during her new pastime?
(a) A hard-boiled egg and coca-cola.
(b) A packet of nuts and apple juice.
(c) A bag of pretzels and root beer.
(d) A peanut butter sandwich and water.

5. At BZ and Helene's, why does Maria focus on remembering brushing Kate's hair?
(a) In order to not forget what her daughter looked like.
(b) In order to convince herself that she is a good mother.
(c) In order to remember to bring a brush to her next visit.
(d) In order to not listen to the conversation around her.

1. According to Carter, what does the hospital where Kate is staying tell him about Maria's frequent visits to see her daughter?

2. How many dollars does Maria withdraw in cash from the bank to pay for the abortion?

3. The season in New York, where Maria lost so much weight the agency wouldn't book her, what did she see every time she looked at food?

4. In the courtroom, Helene confirmed that the defendant, Carter Lang, had repeatedly _______and in other ways _________the plaintiff, Mrs. Maria Lang.

5. What is the name of the first picture Carter made with Maria that never got distributed?

Play It as It Lays from BookRags. (c)2020 BookRags, Inc. All rights reserved.