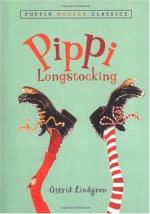 Astrid Lindgren
This set of Lesson Plans consists of approximately 128 pages of tests, essay questions, lessons, and other teaching materials.

1. How does Pippi say she disciplines herself?

Pippi says when she needs some discipline, she asks herself nicely at first, but if that does not work, she becomes sterner with herself, and if she is still disobedient, a spanking may be in order.

2. What does Pippi say to Tommy and Annika about egg yolks?

When Pippi is making pancakes for Tommy and Annika, she tells them egg yolk is good for the hair and makes it grow. She says people in Brazil have eggs in their hair, and nobody is bald. However, there was one man who ate the eggs instead of putting them on his head, and his baldness caused a riot.

3. What does Pippi give Tommy and Annika the first time they are in her house?

Pippi gives Tommy a knife with a mother-of-pearl handle and Annika a sea-shelled covered box with a green-stone ring inside.