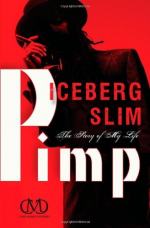 Pimp: The Story of My Life Test | Final Test - Hard

1. Who testifies against Slim at his federal trial?

2. What is the name of Blood's second prostitute?

3. Where does Slim hide during his escape from the State Workforce?

4. What does Slim pretend to be to pull off his post-Leavenworth money-making plan?

5. Who is the first of Slim's working girls to leave him?

1. Slim finally feels like he is totally alone when he is released from Leavenworth in Chapter 16 and discovers Chris has married and had a baby. Is his reaction to this information purely selfish or is it possible that he has himself contemplated marrying Chris and is jealous of her ability to establish love and stability for herself?

2. Slim has two near-murder experiences in Chapter 20. Who does he nearly kill, how and why doesn't he?

3. How does the Chapter 22 title "Dawn" reflect the evolution of Slim's life at this stage?

4. What does the sewer in the chapter 15 title refer to?

5. When Slim meets his biological father again in Chapter 14, what difference becomes clear between his father's treatment and his mother's treatment in Slim's decision to become a pimp?

6. Why is image, represented by material things, so important to a pimp?

7. Why does Blood begin to feel like a real pimp in Chapter 13?

8. Slim manages to move past blunt physical trauma to a more elegant finesse when he realizes he's in danger of losing Rachel in Chapter 20. How does Slim employ his psychological genius once again to ensure Rachel's loyalty?

9. How does the relationship between Chris and Slim evolve during the 1940's in Chapter 14?

10. What consequences to others does Slim fail to consider before or mention after his escape in Chapter 18?

Nature versus Nurture. Bobby Beck's choices as Macking Youngblood and Iceberg Slim can be described as a result of an unfortunate and violent childhood, bad environment and bad parenting/role modeling. Instead of following the example of Henry Upshaw, a man he loved and wanted to be like, Beck chose to follow the example of Steve and the pimps of the Chicago underworld. Is Beck's path in life inevitable given his resentment of women, his violent handling by his father and his available options as a black man in a white, segregated world? Identify key choice points for Beck at various points in his life and his perceived alternatives.

Throughout his life, Slim maintains contact with Mama, even going to sit by her deathbed for six months and ultimately forgiving her. Trace the evolution of Slim and Mama's relationship and show how the changes in their relationship are reflected in the concurrent changes in Slim's life, attitude and choices.

In Beck's early years, doctors, lawyers, bankers were the only high class "Negro" society he was exposed to that looked as well or lived as well as he and his family (with Henry Upshaw). Yet apparently this did not make enough of an impression upon him to lead him to highly value education and he is thrown out of Tuskegee University for bad behavior. In the late 1920's what were the educational and professional opportunities generally available to black men, and how did this affect Beck?