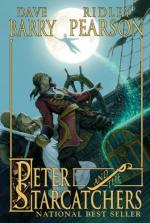 Dave Barry
This set of Lesson Plans consists of approximately 119 pages of tests, essay questions, lessons, and other teaching materials.

1. How does Molly help Peter when they first meet?

Molly helps Peter when they first meet by warning him against trying to sneak off the gang-plank which would have caused him to be whipped by an angry sailor and put in the brig.

2. How did Zarboff become King?

It is said that Zarboff became King when he had his enormous pet snake eat his father, which put him next in line for the throne.

3. What is the Angel's Graveyard?

The Angel's Graveyard is a dangerous piece of the ocean where many ships have sunk, and where pirate ships tend to wait for their next plans or victims.

4. What is wrong with the food first offered to Peter on the ship?

When Peter first sees the food that Hungry Bob tries to give him on the ship, he is horrified to see living worms and a dead rat in it.

Peter and the Starcatchers from BookRags. (c)2020 BookRags, Inc. All rights reserved.