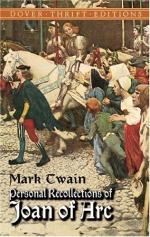 Personal Recollections of Joan of Arc Chapter Abstracts for Teachers

Mark Twain
This set of Lesson Plans consists of approximately 133 pages of tests, essay questions, lessons, and other teaching materials.

• Louis is the narrator of the book, retelling this story as an 82-year-old man. France had been under British rule for 75 years. Armagnacs were loyal to France.

• Louis' parents were Armagnacs and were killed by Burgundians, English loyalists, when he was six. He was sent to a monastery.
• Louis learned to read and write there, and became friends with Joan, a sharp-minded girl about his same age. In Domremy, everyone was Armagnac.

• There was a pool and a spring in the area where fairies lived. The priest banished the fairies as they were declared spawn of the devil.

• Joan was furious about the banishment and used her sharp logic to argue her point. The priest apologized for his actions.

• A poor man came to Joan's door. When Joan tried to feed him her porridge, her father ordered her...

More summaries and resources for teaching or studying Personal Recollections of Joan of Arc.