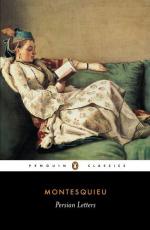 1. What does Usbek request from Rustan in his first letter following his departure?

After his departure, Usbek sends the first letter to Rustan and requests that Rustan tell him about what the people in his home town say about him and his travels.

2. Who does Usbek leave in charge of his home in Ispahan before leaving?

Before leaving, Usbek leaves the head black eunuch in charge of his home. Eunuchs were the only ones allowed to interact with married women in Persia.

3. What sentiment does Usbek have about his decision about the guardian of his wives and home?

According to Usbek in one of his first letters, he feels confident about his decision to leave his wives and home in the hands of the head eunuch.

4. What does Usbek encourage the eunuch to do according to letter 1?

Usbek tells the head of the black eunuchs that he wants him to entertain his wives to keep them happy. Usbek insists the that the eunuch not bring the women to any immoral or unaccepted activity.

Persian Letters. Translated with an Introd. and Notes, by C. J. Betts from BookRags. (c)2020 BookRags, Inc. All rights reserved.