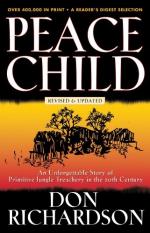 Don Richardson
This set of Lesson Plans consists of approximately 184 pages of tests, essay questions, lessons, and other teaching materials.

1. Near the end of the book, Richardson describes a new place where the mission plane lands. What is that place?

2. What does Richardson believe is stopping the Sawi people from following the Christian path?

3. What do the Sawi men build on the Kronkel river under Richardson's guidance?

4. What machine does the Richardson family have that is very mysterious to the Sawi people?

2. When the Richardsons inform the Sawi leaders that they will be moving, what surprising response do they receive?

3. What are the four levels of despair in the Sawi ritual of "gefam asan"?

4. How do the Sawi people know that Warahai's soul has left his body?

6. When Don Richardson shares the story of Jesus with the Sawi men, what is their reaction?

7. Why does Carol's warm wash water have black specks in it?

8. Why is the arrival of Hurip, the injured Kayagar, such a challenge?

9. What is the custom of fighting as described in Chapter 13, War at my Door?

10. What have the Sawi built in the time after modern life and Christianity have come to them?

What is Don Richardson's goal in coming to live with the Sawi people? He states that he is not interested in simply signing up converts or even in teaching the next generation Christian principals and behavior. What does he want? And why?

It takes a great deal of intelligence to survive in the jungle without modern technology. Yet we often describe cultures like the Sawi tribe as "primitive." What is the difference between the kind of intelligence it takes for a Sawi family to survive in a stone age civilization and the kind of intelligence it takes to graduate from an American university? Are there different kinds of knowledge? Is a Sawi person more observant than the typical American student or less? How would a modern American student fare if set in the jungle with stone tools? How would a Sawi person do in high school or college? Write an essay contemplating Sawi intelligence.