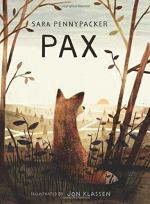 Sara Pennypacker
This set of Lesson Plans consists of approximately 121 pages of tests, essay questions, lessons, and other teaching materials.

• In Chapter 1, Pax notices that Peter is crying and seems to be anxious.

• Pax can feel through the vibrations of the car, that they are slowing down.

• He, Peter, and Peter’s father get out.

• Pax races after it.

• When he returns, Peter and his father are gone.

• In Chapter 2, Peter asks his grandfather about a tin of toy soldiers he finds in the room where he is staying.

• His grandfather tells him that they were Peter’s father’s when he was a boy.

• Peter had found one of the soldiers in his father’s desk, and his father had let him keep it.

• When Pax had seen the soldier, he had made it his toy.

• Peter shows his grandfather a photo that is...

More summaries and resources for teaching or studying Pax.