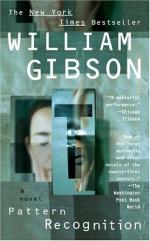 William Gibson
This set of Lesson Plans consists of approximately 134 pages of tests, essay questions, lessons, and other teaching materials.

This self described 'coolhunter' is like a dowser in the global marketing world who could be described as being allergic to fashion.

This is a Belgian who is the founder of Blue Ant.

This F:F:F follower lives in Chicago and is one of about twenty regulars to the site.

This is a fairly highly placed person in the graphics design world and partnership of Heinzi & Plaff and was hired to terrorize Cayce.

This person is one of the missing since September 11, 2001, when he got into a cab in New York City from the Mayflower.

This is a man who took his mother's maiden name from birth as a first name with an effort to eliminate the hyphenated last name that occurred as a result of her marriage to a Soviet diplomat...

More summaries and resources for teaching or studying Pattern Recognition.