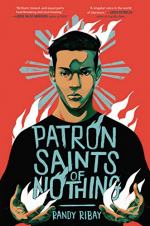 Randy Ribay
This set of Lesson Plans consists of approximately 122 pages of tests, essay questions, lessons, and other teaching materials.

5. After Jun had been staying with his aunts for about a year, Tito Maning called them to say he had missed school for how long, according to their story in "Fail Him in Death"?
(a) 2 months.
(b) 3 weeks.
(c) 3 months.
(d) 2 weeks.

6. Who does Tito Maning say Lapu-Lapu killed with a spear through the face in “That Last Part Aloud”?
(a) Caesar.
(b) Hitler.
(c) Magellan.
(d) Mussollini.

7. Who is the first neighbor to arrive after the karaoke machine is set up and introduce herself to Jay in "Everyone Loses Their Shit"?
(a) Tita Lena.
(b) Tita Rosa.
(c) Tita Bibi.
(d) Tita Maria.

9. Why does Jay not tell his aunts about Reyna's story in "Everyone Loses Their Shit"?
(a) Mia asked that Jay say nothing.
(b) Reyna asked that he not say anything.
(c) Mia believes that they are hiding something.
(d) Jay does not trust them.

12. To what museum do Jay and his uncle go second in “That Last Part Aloud”?
(a) The Ayala Museum.
(b) The Museum of Anthropology.
(c) The National Museum of Fine Arts.
(d) The Pinto Art Museum.

15. What is the home of the Filipino president called?
(a) The Malacanang Palace.
(b) The Tadhana Palace.
(c) The Magmuni-muni Palace.
(d) The Maniwala Palace.

1. Who wrote America Is in the Heart?

2. From how long ago is the picture of Grace with Jun that Jay sees on Grace's Instagram page in "Another Day in the Minefield"?

3. Where do Jay's grandparents live?

4. When did Spain cede the Philippines to the U.S.?

5. What does Jay see in the church in the end of "New Life"?

Patron Saints of Nothing from BookRags. (c)2022 BookRags, Inc. All rights reserved.