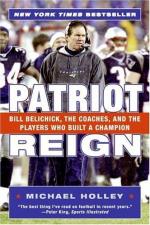 Michael Holley
This set of Lesson Plans consists of approximately 112 pages of tests, essay questions, lessons, and other teaching materials.

5. What type of organization is the Patriots franchise?
(a) Football.
(b) Baseball.
(c) Soccer.
(d) Basketball.

6. What position does Scott Pioli hold with the team?
(a) Cornerback.
(b) Assistant Coach.
(c) Director of Player Personnel.
(d) Special Teams Coach.

8. To what does Belichick attribute his losing his first head coach interview in 1989?
(a) Being too self confident.
(b) Not being quick on his feet.
(c) Not realizing the value of promoting the team.
(d) Not placing enough value on excellence.

9. What is Bill Belichick's role in the Patriots' organization?
(a) He is the Quarterback.
(b) He is the Assistant Coach.
(c) He is the Head Coach.
(d) He is the Director of Player Personnel.

1. Bill Parcells leaves the Patriots before what Super Bowl?

2. What does Belichick expect his players to do when he asks them what has gone wrong with a play?

4. Belichick walks into a press conference having predicted what?

5. What position does Belichick play in 1971 at Andover Wesleyan?

More summaries and resources for teaching or studying Patriot Reign.