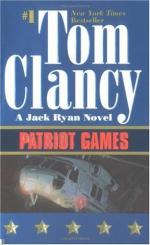 Tom Clancy
This set of Lesson Plans consists of approximately 117 pages of tests, essay questions, lessons, and other teaching materials.

This quiz consists of 5 multiple choice and 5 short answer questions through Chapter 8, Information.

1. Where does the unsuccessful attacker go after the scene at the Mall?
(a) Salisbury.
(b) Balmoral.
(c) Scotland.
(d) Ireland.

2. Which has been unrelenting in the criticism of the Prince?
(a) Princess.
(b) Queen.
(c) Press.
(d) Parliament.

3. What word best describes Ryan's feelings when met being taken away from the hospital?
(a) Angry.
(b) Uneasy.
(c) Tired.
(d) Melancholy.

4. The attacker is a master of which of the following:
(a) Hand to hand combat.
(b) Accents.
(c) Languages.
(d) Counter intelligence.

1. Which of the following was not one of the officers to visit Ryan?

2. What is the person's role in the PIRA?

3. How long does it take for the officers to verify Ryan's credentials?

4. How long does it take for the trial to begin?

5. The people Ryan saved, the Prince and Princess of Wales, were in which type of car when attacked?