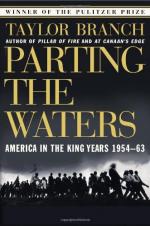 Taylor Branch
This set of Lesson Plans consists of approximately 109 pages of tests, essay questions, lessons, and other teaching materials.

This quiz consists of 5 multiple choice and 5 short answer questions through Chapter 16, The Fireman's Last Reprieve,.

1. What is the title of Niebuhr's book that King reads in this chapter?
(a) Non-violence and Revolution
(b) Passions of an Everday Man
(c) Moral Man and Immoral Society
(d) Looting the World

2. In what state does Robert Kennedy make a speech in this chapter?
(a) North Carolina
(b) New York
(c) Georgia
(d) South Carolina

3. Why does Robert Kennedy begin to shy away from King?
(a) To preserve his reputation
(b) To protect his family
(c) To win southern white votes
(d) To perserve his brother's presidency

4. Who does Hoover warn Kennedy to stay away from?
(a) Martin Luther King
(b) Marilyn Monroe
(c) Sammy Davis Jr
(d) Frank Sinatra

1. What does the Atlanta Female Baptist Seminary change their name to?

2. What member of Farmer's family dies in this chapter?

3. What grade does Mike have to start in a high school?

4. Who does Robert Kennedy fear racial tension will make USA appear weak to?

5. Where is Ralph Abernathy the pastor?