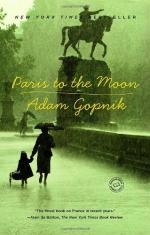 Paris to the Moon Chapter Abstracts for Teachers

Adam Gopnik
This set of Lesson Plans consists of approximately 129 pages of tests, essay questions, lessons, and other teaching materials.

The Winter Circus—Paris to the Moon and Private Domain

• Adam Gopnik is a writer for the New Yorker who moves to Paris with his wife Martha and infant son Luke from 1995 to 2000.

• He writes about French life from the perspective of a bemused American who has always had a soft spot for France since his stay there in his youth.

• Adam sees France as becoming more different as the rest of the world becomes more homogenized, and he attempts to describe the greater French perspective through micro illustrations and anecdotes.

• After arriving in Paris, the Gopniks hear of a scandal surrounding Prime Minister Alain Juppe, who has essentially rented apartments owned by the city to himself for a bargain price.