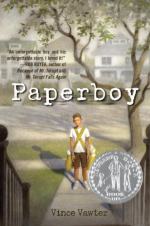 Vince Vawter
This set of Lesson Plans consists of approximately 135 pages of tests, essay questions, lessons, and other teaching materials.

3. What is Mrs. Worthington drinking when she and Little Man have a miscommunication in Chapter 2?
(a) Wine.
(b) Whiskey.
(c) Water.
(d) Lemonade.

6. What does Mam tell Little Man's she's cooked for his dinner with his parents when he returns home from his route in Chapter 6?
(a) Fried chicken.
(b) Pizza.
(c) Potato soup.
(d) Spaghetti.

7. What does Little Man order for dinner at the restaurant in Chapter 7?
(a) Tacos.
(b) Spaghetti.
(c) A hamburger.
(d) Steamed mussels.

14. What three words has Little Man practiced in order to start a conversation with Mrs. Worthington on his route in Chapter 7?
(a) "Paper boy delivery."
(b) "Love your hair."
(c) "Cool for July."
(d) "Nice weather out."

1. Who "didn't invent the modern alphabet, [but] he did help us preserve it," according to Mr. Spiro in Chapter 5?

2. By what nickname does Mam call the narrator of the story?

3. Who is the author of Being and Time?

4. What street does Mrs. Worthington live on?

5. What color hair does Mrs. Worthington have?