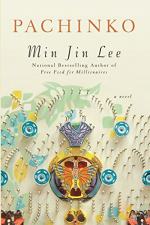 1. What does Takano-san employ Noa as in Book Three, Chapter 1?

2. What does Senora Wakamura say on Other Lands in Book Three, Chapter 12?

3. Why does Phoebe say to Sunja and Kyunghee in Book Three, Chapter 18 that she grew up eating fast food?

5. What does Yoseb tell Sunja to do to pay for Noa's university tuition in Book One, Chapter 13?

1. What does Noa's letter to Sunja and the Baek family say Book Two, Chapter Twenty after he learns Hansu is his father?

4. What does Hana tell Solomon in their final meeting in Book Three, Chapter 20?

5. What does Etsuko think about her role as a mother in Book Three, Chapter 10?

6. Why does Solomon get fired from his job in Book Three, Chapter 19?

7. What leads Haruki to become a police officer as described in Book Two, Chapter 17? Who recommends him to join?

8. In Book Three, Chapter 21, what does Sunja find inside her bag while at Isak's grave and what does she do with it?

9. What does Solomon want to do for his and Hana's relationship in Book Three, Chapter 14?

10. How does Sunja feel seeing Hansu in the kitchen with her in Book Three, Chapter 4?

At the end of the novel, David Copperfield is brought up as Noa's favorite novel. Why does he like this particular book? Choose another example of intertexuality in the book (such as the Bible, the book of "Hosea, "Daniel Deronda," the epigraphs at the beginning of each book). How do these stories map out and connect to the story in the novel? Do some background research and pull excerpts from the intertextual sources to support its connection to Pachinko. How does having multiple examples of intertextuality expand different sections of the text?

In the beginning of Pachinko, Hoonie's parents raise him according to the ideal that, "a spoiled son did more harm to the family than a dead one" (6). Later, we see characters such as Sunja and Hansu thinking and speaking about how their parents treated them. We see Noa commit suicide based on his parentage. How does the way different parents raise their children affect the way these children represent their families and carry out their lives? How do they raise their children as a result? Use at least two characters to develop an argument. Finally, does what Hoonie's parents use for raising their son hold true for the rest of the novel?

At the beginning of Pachinko, the first sentence says, "History has failed us, but no matter" (5). Who is this "us"? How have they been "failed" by history? Who constructed this history that failed them? Develop an answer using four examples drawn from the novel.