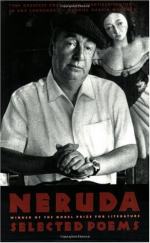 Pablo Neruda
This set of Lesson Plans consists of approximately 125 pages of tests, essay questions, lessons, and other teaching materials.

This quiz consists of 5 multiple choice and 5 short answer questions through I will Come Back | The Portrait in the Rock | Fiesta's End.

2. Why does the poet say he will say nothing in "I will Come Back"?
(a) Because he is misunderstood.
(b) Because he won't have a mouth.
(c) Because no one listens.
(d) Because he will have nothing to say.

4. When describing things in "Autumn Returns," what does the poet focus on?
(a) Their colors.
(b) The way they sound.
(c) Their textures.
(d) The way they smell.

1. What is ruined at the end of "There's No Forgetting"?

2. What do the bells in "Autumn Returns" mean?

4. In "The Way into Wood," what does the poet say about apologies?

5. In "The Ships," what type of ships are described as being the worst?