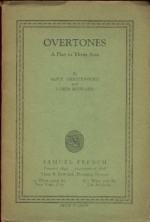 Alice Gerstenberg
This set of Lesson Plans consists of approximately 101 pages of tests, essay questions, lessons, and other teaching materials.

• The play opens in the anteroom of a dining room in a large hotel.

• A man called John Caldwell enters the dining room. His shabby appearance and nervous disposition suggest he is an artist.

• John's wife, Margaret, enters the dining room. John is irritated with her because she is intent on finding wealthy patrons to secure some work for John. He says he would prefer to be in his studio painting.

• Margaret tells John he is lucky to have her as a wife rather than a woman called Harriet. Unlike Harriet, Margaret says she is ambitious. As she talks her alter ego, Maggie, appears behind her. Maggie looks exactly like Margaret apart from her face being veiled in tulle.

• When John and Margaret exit the stage, a businessman called William Sterling and his wife, Harriet, enter the scene.

• Harriet is angry at William for not securing a...