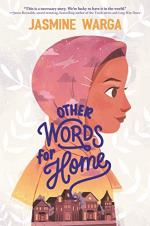 Jasmine Warga
This set of Lesson Plans consists of approximately 137 pages of tests, essay questions, lessons, and other teaching materials.

1. What does Jude think when she looks in the mirror wearing her hijab for the first time?
(a) She looks more mature and wiser.
(b) She looks younger now.
(c) She looks overwhelmed by the scarf.
(d) She looks more like her mother.

4. What are some unpleasant things Jude reads about in her uncle's copy of the newspaper every day?
(a) How America is running out of money.
(b) How America does not want to send any more money to Europe.
(c) How there will be an English test for people like her that she has to take soon.
(d) How some Americans do not want immigrants and refugees coming into the country.

5. What does Jude say when she first comes into the Middle Eastern restaurant?
(a) Norbili.
(b) Marhaba.
(c) Maharai.
(d) Skety.

6. Where does Mama tell Jude that Fatima is living with Aunt Amal?
(a) Lebanon.
(b) United Arab Emirates.
(c) Aleppo.
(d) Saudi Arabia.

8. What does Jude often see Aunt Michelle doing in the early morning?
(a) Staring out the window and into the backyard.
(b) Working at her computer.
(c) Raking the leaves.
(d) Talking in whispers with Uncle Mazin.

11. Why did Fatima and Amal move out of Syria?
(a) Fatima's Baba lost his job and it was getting too dangerous.
(b) They needed to visit relatives in Lebanon.
(c) Their house was bombed.
(d) They were in danger of being arrested in Syria.

12. What does Jude say to the rude woman at the hospital?
(a) Jude does not say anything.
(b) Jude says they are free.
(c) To mind her own business.
(d) They are happy.

13. What does Jude like more after hearing the bad news from Syria in Part III?
(a) Her letters.
(b) Sleeping in the same bed as Mama.
(c) Her Aunt Michelle's food.
(d) Her new winter coat.

14. Who is one woman Jude admires who also wears a hijab?
(a) Malala Yousafzai.
(b) Amal Aluddin.
(c) Nomi Nouridin.
(d) Jamila Jayapal.

15. Why does Jude tell Mama she did not tell her about the play tryouts?
(a) She did not want Mama to worry.
(b) She thought Mama would be angry.
(c) She was embarrassed in case she did not get a part.
(d) She was not really sure if she was going to go through with it.

1. What does Omar say he is thankful for ahead of Thanksgiving?

2. Who is the boy from Jude's math class who always wears the space t-shirts?

3. What does Aunt Michelle start calling Jude in Part III?

4. What does Jude say she is thankful for ahead of Thanksgiving?

5. What does the woman in the hospital say to Jude's Mama as they are leaving?

More summaries and resources for teaching or studying Other Words For Home.

Other Words For Home from BookRags. (c)2022 BookRags, Inc. All rights reserved.