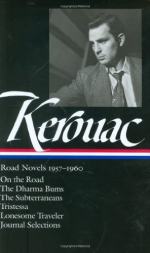 On the Road Chapter Abstracts for Teachers

Jack Kerouac
This set of Lesson Plans consists of approximately 128 pages of tests, essay questions, lessons, and other teaching materials.

• Sal Paradise is introduced to Dean Moriarty who has recently been released from a reformatory.

• Dean later visits Sal and asks him to teach him how to write; Dean soon moves in with Sal.

• Dean is introduced to Carlo Marx and they become instant friends which makes Sal feel alienated.

• Dean has saved up enough money working as a parking attendant to travel out West.

• Sal wants to accompany Dean to get to know him better.
• Sal leaves New York in July 1947, with fifty dollars in veterans benefits.

• Remi Boncoeur, a friend from prep school living in California, has invited Sal to take a round-the-world trip on an ocean liner with him.

• Sal reluctantly buys a bus ticket from New York to Chicago with a large portion of his money.

• Sal begins hitching rides and makes it to Iowa.

More summaries and resources for teaching or studying On the Road.

On the Road from BookRags. (c)2020 BookRags, Inc. All rights reserved.