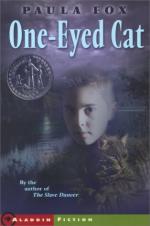 This quiz consists of 5 multiple choice and 5 short answer questions through Chapters III and IV.

1. What does Mama mention that embarrasses Ned?
(a) A girl in his school.
(b) His changing voice.
(c) His uncle's high regard for Ned.
(d) The air rifle.

2. What does Mr. Scully give Ned for Ned's birthday?
(a) A carving knife.
(b) A comic book.
(c) A whistle.
(d) A piece of soapstone carved with Chinese characters.

3. What did Ned feel on the day of the visit with his father years ago that he felt when he went out in the night?
(a) That life was far beyond his comprehension.
(b) That he was being watched.
(c) That he was never going to understand his father.
(d) That he was older than his father realized.

4. What does Ned think of his present from Mrs. Scallop?
(a) That the shoulders are too big.
(b) That the fingers are too short.
(c) That the colors are nice.
(d) That it's horrible.

5. What does Ned's father not understand about Mr. Kimball?
(a) How he affords to feed such a large family.
(b) Why he travels out of town so much.
(c) Why he does not discipline his children.
(d) Why is treats his wife so poorly.

1. What does Ned think about Mr. Scully?

2. What is one chore Ned does for Mr. Scully?

3. Why does Ned fluster Evelyn?

4. What does Ned imagine as he is walking back to the house at night?

5. What does Ned have trouble doing that his father told him to do?