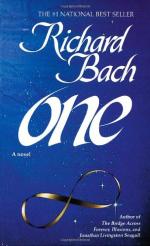 Get One from Amazon.com
View the Study Pack
Lesson Plans
Order our One Lesson Plans

Richard Bach
This set of Lesson Plans consists of approximately 120 pages of tests, essay questions, lessons, and other teaching materials.

2. What does Richard say that Dave and his wife have taught him and Leslie?
(a) To work harder.
(b) To save for when they are older.
(c) Not to regret how they've lived.
(d) How to live when they get home.

3. What does the line-boy say about flying a Seabird?
(a) They have a bad reputation.
(b) It's too much plane for him to handle.
(c) He's heard they can land almost anywhere.
(d) They handle well in turbulence.

7. What is the sport called that the fighter planes are competing in?
(a) Flying Fiesta.
(b) Air & Rocket Racing Show.
(c) Air Games.
(d) Warbird Airshow.

8. What does Richard suggest that he and Leslie do when they reach the crash site in order to find their way home?
(a) Analyze the patterns.
(b) Solve the combination.
(c) Find the key.
(d) Jump overboard.

9. What instructions does a voice tell Richard to follow in Chapter 12?
(a) Fly till the pattern turns amber.
(b) Fly low.
(c) Fly right, then left.
(d) Fly until the light disappears.

10. What happens when Mashara dies?
(a) Leslie brings her back to life.
(b) Leslie is sent back in time.
(c) Richard hurtles into another universe.
(d) Richard and Leslie have to leave her.

11. What role does Mashara play in the wilderness planet?
(a) Rescuer.
(b) Mathematician.
(c) Scientist.
(d) Census taker.

12. What activity do Leslie and Richard undertake at Lake Healey?
(a) Eating.
(b) Painting.
(c) Writing.
(d) Swimming.

13. What does Richard dislike about Dave?
(a) That he swears.
(b) That he is mean to his wife.
(c) That he jiggles his leg.
(d) That he smokes and drinks beer.

15. What did Xiao do after he "destroyed" the fighter plane?
(a) Laughed and waved.
(b) Clapped.
(c) Shook his fist in victory.
(d) Used the thumbs up sign.

1. When Leslie sees Ronnie, what does she say he looks like?

2. What is the last thing that Leslie says in Chapter 20?

3. What does Leslie wonder if they are trapped in in Chapter 19?

4. What direction do Leslie and Richard find themselves flying in when they are in the fighter plane with the alternate Leslie?

5. What is the name of Richard's alternate self in Chapter 12?

More summaries and resources for teaching or studying One.

One from BookRags. (c)2022 BookRags, Inc. All rights reserved.