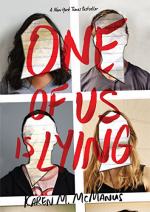 Objects & Places from One of Us Is Lying

This is the gossip app Simon created about the students of Bayview High.

This is the item the students were looking for to help Simon when he falls to the floor wheezing.

This is the residue found in the plastic cup Simon was drinking out of before his attack.

This is a school in a growing, wealthy community 15 miles east of San Diego.

These are devices Mr. Avery searches for and has banned from class.

This is a form of punishment, held in a classroom, where the initial action takes place.

This is a social networking website where someone posts updates about Simon's death.

This is an object one of the characters rides that represents rebellion.

This is a court ordered restriction which is put on an individual after committing a crime.

One of Us Is Lying from BookRags. (c)2020 BookRags, Inc. All rights reserved.