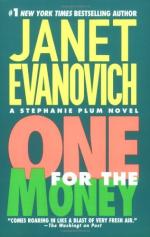 One for the Money Test | Final Test - Hard

Janet Evanovich
This set of Lesson Plans consists of approximately 178 pages of tests, essay questions, lessons, and other teaching materials.

1. How does Joe Morelli end up in police custody in Chapter 13 for the murder of Ziggy Kulesza?

2. Why does Stephanie go to Kuntz Appliances in Chapter 12?

3. Why is Stephanie horrified when Morelli apologizes?

4. When Stephanie tells Jimmy Alpha at the end of Chapter 11 that she's going to the police, what does Alpha ask her to do?

5. How does Joe Morelli reply at the end of the book when Stephanie tells him he's scum?

1. What theory does Stephanie give Jimmy Alpha in Chapter 11 about the events of the night of Ziggy Kulesza's shooting?

2. Explain the deal that Morelli proposes to Stephanie at the end of Chapter 10.

3. Who triggers the alarm system on Morelli's Jeep in Chapter 12, and what happens when he tries to start the Jeep?

5. Why is Stephanie not afraid when she comes home to find Morelli in her apartment in Chapter 10?

6. What arouses the curiosity of Morty Beyers when he visits Stephanie and makes him start asking Stephanie's neighbors if they've seen Morelli?

7. Does Lonnie Dodd respect Stephanie as a bounty hunter?

8. When the car alarm goes off as he tries to enter his Jeep, what does Morelli tell Stephanie he will do once the Kulesza case is over?

9. Who does Stephanie rule out as being responsible for the bomb and to what does she think it's related?

10. Why does Stephanie suspect that Ramirez killed Sal and Louis?

Cars and Stephanie's lack of one, or trouble with one, is a continuing motif throughout One for the Money.

Part 1) Discuss the meaning of the Miata, the Nova, and the Jeep Cherokee as well as the significance of Stephanie's lack of a car when she is apprehending William Earling.

Part 2) Indicate whether you believe the vehicles and the incident of Stephanie lacking a vehicle each symbolizes the same thing or if they each symbolize something different.

Part 3)Discuss what function these symbols serve in the story.

Food and Stephanie's love for it is a continuing motif throughout One for the Money. Cite 3 examples of the use of this motif and discuss what it symbolizes in the story, what it reveals about the character of Stephanie, and how it helps establish one of the story's themes.

Discuss the female characters in One for the Money. Compare and contrast Lula, Connie Rosolli, Grandma Mazur, Helen Plum, and Stephanie Plum. Cite examples from the book to support your conclusions.

More summaries and resources for teaching or studying One for the Money.

One for the Money from BookRags. (c)2022 BookRags, Inc. All rights reserved.