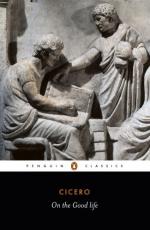 Cicero
This set of Lesson Plans consists of approximately 110 pages of tests, essay questions, lessons, and other teaching materials.

3. According to Laelius, how is friendship formed?
(a) Through thought.
(b) Through love.
(c) Through food.
(d) Through desire.

6. Why are great orators hard to find, according to Cicero in "On the Orator"?
(a) Many speak well, but lack information.
(b) Stage fright.
(c) Few have the mastery of the many distinct arts.
(d) Many have information on many arts, but speak poorly.

2. What must the orator master?

3. When was Cicero's essay "Laelius: On Friendship" written?

4. What do true friends not enjoy doing, according to Laelius?

5. What does Cicero claim about the text of 'Laelius: On Friendship"?

More summaries and resources for teaching or studying On the Good Life.

On the Good Life from BookRags. (c)2022 BookRags, Inc. All rights reserved.