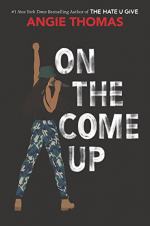 On the Come Up Test | Final Test - Hard

Angie Thomas
This set of Lesson Plans consists of approximately 168 pages of tests, essay questions, lessons, and other teaching materials.

1. In Chapter Fourteen, who is Bri's family's landlord?

2. In Chapter Thirteen, where does Bri upload her song before sending it to Supreme?

3. In Chapter Sixteen, what musician is Bri shocked that Curtis has never heard of?

4. In Chapter Fourteen, what does Supreme tell Bri Aunt Pooh should be doing for her?

5. In Chapter Twenty, how does Malik suggest that Bri release the video of her and Long and Tate on her own terms?

1. In Chapter Fifteen, why is Bri not allowed into The Ring to peform?

2. In Chapter 13, what does Jay give to Bri and Trey that means more to Bri than new presents?

3. In Chapter 19, what is Bri so upset that her mother had to do in order to help them afford food?

4. In Chapter 13, what makes Bri want to upload her song to Dat Cloud and send it to Supreme?

5. In Chapter Twenty-One, what happens between Malik and Bri that makes them both feel awkward?

6. In Chapter Seventeen, what are Shana, Malik, and others trying to convince Bri to agree to that they believe will help their activist aims?

7. In Chapter Seventeen, how does Jay find out about Bri's song On the Come Up and what the song is about?

8. In Chapter Twenty, what does Malik propose about releasing the video of Bri and Long and Tate that Bri actually considers might work for her?

9. In Chapter Sixteen, why does Bri start to have doubts about having Aunt Pooh as her manager?

10. In Chapter Seventeen, what happens at Bri's school when the students see that Long and Tate are back on duty?

In Chapter 11, Bri fights with Malik after he accuses her of rapping a certain way just to make money. Write an essay analyzing the effect Bri's family's struggles with money has on her friendships during the course of the novel.

Write an essay analyzing how the tensions between Bri's grandparents and Bri's mother, Jay, affects Bri throughout the novel, citing specific references to the text to support your answers.

Write an essay analyzing Bri's range of reactions to the controversies "On the Come Up" gives rise to, including the petition a white mother of a student at her school begins circulating to have the song taken down from its hosting platform.

On the Come Up from BookRags. (c)2022 BookRags, Inc. All rights reserved.