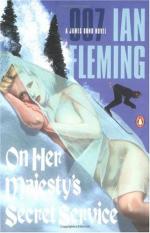 Ian Fleming
This set of Lesson Plans consists of approximately 104 pages of tests, essay questions, lessons, and other teaching materials.

The students should divide into pairs. One member of the pair should play Bond and the other member of the pair should play Blofeld. Players should role a dice to decide on the following factors; stamina, strength and skill. For each category the player should add 10 to their roll, for example 4 would equal 14. The idea of the game is to use the dice to battle each other. After each go a player loses one stamina point. Whatever the player rolls half of that total is taken off his strength plus half a point for each skill point over 10. When a player's strength falls under half his score he loses another half point of his stamina. The first person to lose all his stamina loses the game.

The Next James Bond

In class everyone should decide who they would like to be the next...

On Her Majesty's Secret Service from BookRags. (c)2021 BookRags, Inc. All rights reserved.