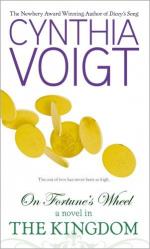 This quiz consists of 5 multiple choice and 5 short answer questions through Chapter 11.

1. What question from Birle turns the Lord reticent for two days?
(a) "Why did you run away, my Lord?"
(b) "Do you go south, then, to know if there are dragons?"
(c) "Can a Lord marry again, under the law?"
(d) "Do you never think that it is the man should bring a dowry to the woman?"

3. How does Birle feel at the thought of marrying Muir?
(a) Nonchalant.
(b) Confused.
(c) Heartbroken.
(d) Ecstatic.

5. What happens to Birle when she realizes she has been spotted by the thief?
(a) She lets out a cry to sound the alarm of the theft.
(b) She pulls the boat towards her and away from the thief.
(c) She tries to get the boat and falls into the water.
(d) She tackles the thief.

1. What does Orien do to entertain Birle and pass the time while they are stranded on the rock?

2. How do the people of the village bathe in the winter, according to Birle?

3. What does Orien tell Birle without her even asking?

4. What is Birle's position in society?

5. Where on the ship is Orien moved to near the beginning of Chapter 11?