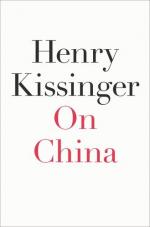 Get On China from Amazon.com
View the Study Pack
Lesson Plans
Order our On China Lesson Plans

On China Chapter Abstracts for Teachers

Henry Kissinger
This set of Lesson Plans consists of approximately 98 pages of tests, essay questions, lessons, and other teaching materials.

• Kissinger states his role as a diplomat to China.
• History of China is explored.
• Yellow Emperor is discussed.
• China was the first country to undertake naval exploration.

• Zheng He is introduced.
• China is ruled by the Mandate of Heaven.

• Confucius is introduced.
• China's tendency toward isolation and war are discussed.

• The Erosion of Authority: Domestic Upheavals and the Challenge of Foreign Encroachments

• Mao and the Great Harmony
• Mao and International Relations: The Empty City Stratagem, Chinese Deterrence, and the Quest for Psychological Advantage

More summaries and resources for teaching or studying On China.

On China from BookRags. (c)2021 BookRags, Inc. All rights reserved.