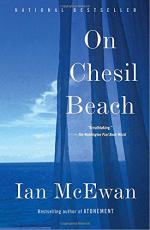 Ian McEwan
This set of Lesson Plans consists of approximately 180 pages of tests, essay questions, lessons, and other teaching materials.

2. How does Florence feel about the prospect of having children?
(a) She is worried that she will engage in the same types of abuse to which she had been subjected.
(b) She thinks that she would love being pregnant by Edward.
(c) She does not think she would make a good mother.
(d) She fears the prospect of childbirth.

3. What body of water does Chesil Beach border?
(a) The English Channel.
(b) The River Trent.
(c) Lake Windermere.
(d) The Thames.

4. What item does Edward always keep in his jacket pocket?
(a) A paperback book.
(b) A bottle opener.
(c) A letter opener.
(d) A handkerchief.

5. The narrator reveals that Florence and Edward "regarded themselves as too" what "to believe in destiny" (45)?
(a) Smart.
(b) Religious.
(c) Sophisticated.
(d) Philosophical.

6. What is NOT one of Florence's favorite actions that the other girls at her hostel take?
(a) They bring blankets and fruit to ill girls.
(b) They celebrate the other girls' birthdays.
(c) They meet every morning for prayers.
(d) They are kind.

7. What verb does Florence's mother, Violet, use to describe Florence's violin playing?
(a) Screeching.
(b) Praying.
(c) Moaning.
(d) Singing.

8. What does the narrator name as Edward's main activity during the weekends in his college years?
(a) Playing poker.
(b) Studying.
(c) Playing football.
(d) Dancing.

11. The narrator states that when Edward first sees Florence, the lighting makes her face resemble a what?
(a) A mirror.
(b) A carved mask.
(c) A porcelain doll.
(d) A shimmering vision.

13. What is Florence's sole source of information about sex?
(a) Her mother's three-minute talk.
(b) A paperback guide for new brides.
(c) Nature television programs.
(d) A single day's lesson in health class.

1. To what city does Edward ultimately take the train on the day he meets Florence?

2. What item does Florence wear when she practices her scales that causes Edward to dream of a future daughter they might have together?

3. For how many hours a day does Florence practice the violin during her college years?

4. What image is on the paperback guide that Florence relies upon for information about sex?

5. How old is Florence when her father Geoffrey takes her on each of the two boat trips to Carteret?