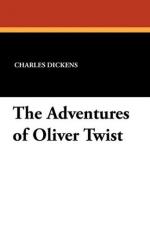 Charles Dickens
This set of Lesson Plans consists of approximately 145 pages of tests, essay questions, lessons, and other teaching materials.

2. What does Mr. Bumble tell Mrs. Sowerberry was the cause of Oliver's bad behavior after Oliver's attack?
(a) Sleep deprivation.
(b) Mocking and taunting.
(c) A fever.
(d) Too much food.

3. What is Fagin most worried about when he hears that Oliver is in jail?
(a) That he won't come back when he gets out of jail.
(b) That he will forget everything Fagin taught him.
(c) That he will die in prison because he is ill.
(d) That he will reveal where Fagin lives.

4. What does Oliver tell Rose and the doctor when he comes to after being treated for his wounds?
(a) The story he was taught by Fagin to tell.
(b) What he would like to become.
(c) His life story.
(d) His thought out apology.

1. What does Oliver eat at Toby's house?

2. What is the sentence given to Oliver after his hearing?

3. Who does Fagin get to force Oliver to cooperate while they are away at the next big robbery?

4. What does Oliver's mother do just before she dies?

5. What do many infants die of while Oliver works for Mr. Sowerberry?

1. What does Charley do when Bill enters Toby's hideout?

2. What does Rose say is the only way she will agree to marry Harry, and why does she feel this way?

3. What does Oliver do at the regular workhouse that gets him in trouble?

4. How does Bill try to hide the evidence of his murder?

5. What does Mr. Bumble do while he visits with Mrs. Corney, and how does she react?

6. How is Oliver's name cleared at the hearing after the theft of the handkerchief?

8. What does Nancy do when Bill refuses to let her out of the house on Sunday night?

9. What condition is given in Oliver's father's will about his son receiving an inheritance?

10. What does Mr. Giles not tell Mrs. Maylie about Oliver, and why?