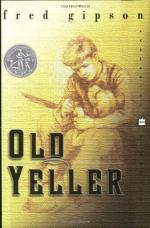 1. Explain why Travis' father is travelling to Abilene, leaving Travis in charge of the family.

Papa is travelling to Abilene with a cattle drive to earn extra income for the family.

2. Describe what Travis reveals about his relationship with Old Yeller in the beginning of the chapter.

Travis says that Old Yeller annoyed him at first but then Travis feels like he lost a member of his family when he has to kill the dog.

3. Summarize why Mama names the area in which they live Birdsong Creek.

The first time she and Papa camped there, the mockingbirds were singing in the blooming bee myrtle.

He doesn't want another dog because his lifelong dog, Bell, dies from a rattlesnake bite to its nose. Travis is devastated by Bell's death.

Travis goes to the dog run to cut down some meat that is hanging there and sees that the meat is gone. A large dog is curled up on the ground eating the meat.