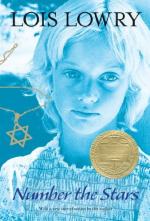 2. Which of the following events is the only thing Annemarie knows is true about Lise's death?
(a) She was 21 when she died.
(b) She died in tremendous pain.
(c) Peter was with her when she died.
(d) She was hit by a car.

3. What special treat did Mama serve for dinner in addition to the fish in Chapter 7?
(a) Applesauce.
(b) Candy.
(c) Potatoes.
(d) Cupcakes.

5. In English, what is the name of the illegal newspaper which Annemarie's parents read occasionally?
(a) Freedom Fighters.
(b) Danish Freedom Today.
(c) The Free Danes.
(d) Freedom from Germany.

1. What does Kirsti show to the German soldiers when they are stopped getting on the train in Chapter 6?

2. Where do Annemarie, Ellen, and Kirsti pretend they are taking their dolls in Chapter 4?

3. In what way has Peter changed since Lise has been gone?

4. Which of the following characters is Anemarie's younger sister?

5. Whose house had Annemarie been visiting when she saw Sweden?