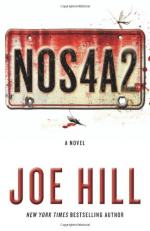 Joe Hill
This set of Lesson Plans consists of approximately 160 pages of tests, essay questions, lessons, and other teaching materials.

2. What kind of dog is Hooper?

3. What is the name of the Indian police officer who arrives after Vic calls 911 about her son’s kidnapping in "Search Engine, July 6-7"?

4. “Come All Ye Faithful, October” opens on what day of the week?

2. How do the police respond to Vic’s story of her assault and Wayne’s abduction in "Search Engine, July 6-7"?

4. What occurs simultaneously with the destruction of the Christmas ornaments in "Come All Ye Faithful, October"?

5. Who advises Wayne in the backseat of the Wraith in "Search Engine, July 6-7"? What advice is given?

7. Where does Vic travel to via the Shorter Way Bridge after she leaves Bing’s home in "Christmasland, July 7-9"? What does she learn here?

10. Where does Vic travel to across the Shorter Way Bridge on the Triumph in "Search Engine, July 6-7"? What takes place at this location?

Discuss the physical and mental effects that crossing the Shorter Way Bridge appear to have on Vic. Why do you think Vic becomes feverish and ill once she crosses the threshold? What auditory experiences does Vic have when she crosses the bridge?

Describe and discuss the phone calls from Christmasland that Vic begins receiving in "Interlude: The Spirit of Ecstasy, 2000-2012." Who calls Vic first? What is the reason the child says he is calling? How does Vic respond to the calls?

More summaries and resources for teaching or studying NOS4A2: A Novel.