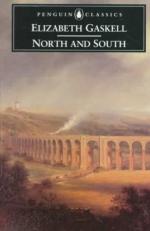 Elizabeth Gaskell
This set of Lesson Plans consists of approximately 136 pages of tests, essay questions, lessons, and other teaching materials.

The narrator describes this main character as pretty, but often the other characters hint that this person's looks are disappointing in comparison to both of this person's parents.

This death of this character's father forces this character to quit school early and work in a factory. Eventually, this person works up the ladder, earning enough money to become a master and run the mill house.

This person begins the novel as a reverend, but religious doubts force this person to move with family away from their beloved New Forest home and to the harsher climes of the industrial North.

This character is described by another as a beautiful person who once played a major role in the London social scene. Ideally, this person would have liked to stay in London, but eventually moves to Helstone.