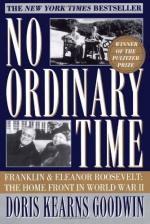 The author makes the point that in spite of their places on the world stage, Franklin and Eleanor Roosevelt were also a married couple with problems just like any married couple. Name some of the challenges of the Roosevelt marriage. What were their coping mechanisms? What were their attempts to strengthen or weaken the bond through the years?

What impact did Roosevelt's New Deal have on a Depression-era America? What personal and leadership traits did he exhibit that engendered such trust in the American people? Did this trust extend into the pre-war years? Explain.

Prior to American's involvement in the war, Roosevelt called for massive arms production in anticipation of meeting the Nazi threat head on. What was the feeling in the country about Roosevelt's pre-war efforts? What was the position of isolationists such as famed aviator, Charles Lindbergh?